Gazing, seeing and watching; these acts are some of the most outward engaging acts of people. A gaze is rather less physically requiring in comparison – yet still ranging. A gazecan be dull, direct, or piercing.
‘Distant Gaze’ brings together alternative approaches towards portrait and the act of gazing. Constructed around interdisciplinary status quo, this exhibition explores the classical approach of portraiture: figure in pure gaze, only the portion above chest. Portraits investigated in different levels of individual and social means reveal traces of personal memory, codes of collective memory, and the cults subjects of history of art.
Portaits that historically were definitive of symbols and subjects still carry out its quality of being expressive of various objectives. In Ancient Rome, busts of national military figures as symbols of power and force would be paraded to the public. These busts – serving their aim – would add even more strength to the iconised figures of war and to give them god-like might. Since then, portraits have been used in multidimensional and pluralist situations and subjects: in art’s ability to reform and reshape societies, portraiture has been a distinct narrative tool of identity. One of the major examples of use of portraiture in mythology is the head of Medusa: with dancing snakes in her hair and freezing look in her eyes, she is the symbol of power and fear despite her decapitated head.
This exhibition investigates different subjects through portraits and the gaze, taking up the past and the present of art via artists from different disciplines. The works of Recep Serbest, where he transforms the cult female figures into contemporary icons, whether in black void or surrounded by shining gold stars, offer strong visuals of various media. Contrastingly, Burak Ayazoğlu turns this metaphor upside down in his works that alter the formal qualities of portraits and abstract the human image. In his sculptures, Ayazoğluuses 3D printing technology for his deformation/reformation, drawing attention to the fragile yet disruptive relation between humans and nature.
Dicle Çiftçi focuses on the image of women in a society purely driven by aesthetical concerns in her practive of mixed media peinture. The artist concentrates on the objectification of women through mass media and advertisement culture, social missions attributed to women related to female identity and the existential struggle of this identity. In his visual language of illustration and street art, Cins communicates an abstract approach to portrait. Through the title he gives his work, he claims it to be a portrait and this linguistic claim alone confirms this quality. Baran Kurtoğlu uses a multi-layered artistic technique that result in a rather dull and cold gaze in the eyes of his of his figures. His use of found papers and other materials articulate a strong visual language. Seen as portraits and scenes of gaze, the faces in Kurtoğlu’s works embody a play of texture and paint.
Ali Şentürk offers a portrait of a man and a woman in a social structure; a man and a woman as traditional components. He forms the basis of family culture with wires. An image of amiddle aged man with a mustache and a tie sitting by a table,behind him a woman with tied up hair: these figures welcome us like a classical family scene.
Hasan Özgür Top presents his work in a tryptic set up where there is a gradient shift from the visible to the invisible portrait. This body of work symbolises the loss of identity in socities, dissappearence through cultural and political segments. A portrait slowly fading, with a deforming gaze, acts almost as a mirror reflecting the society we live in.
“Distant Gaze” is a contemporary commentary on the portrait tradition, its traces on personal and social roles interpreted by artists of different media. The exhibition’s name also refers to the space’s physical distance to the other art spaces. “Distant Gaze” invites the viewer to this world of portraits by offering a view from afar on self-observing and outward-questioning art world. 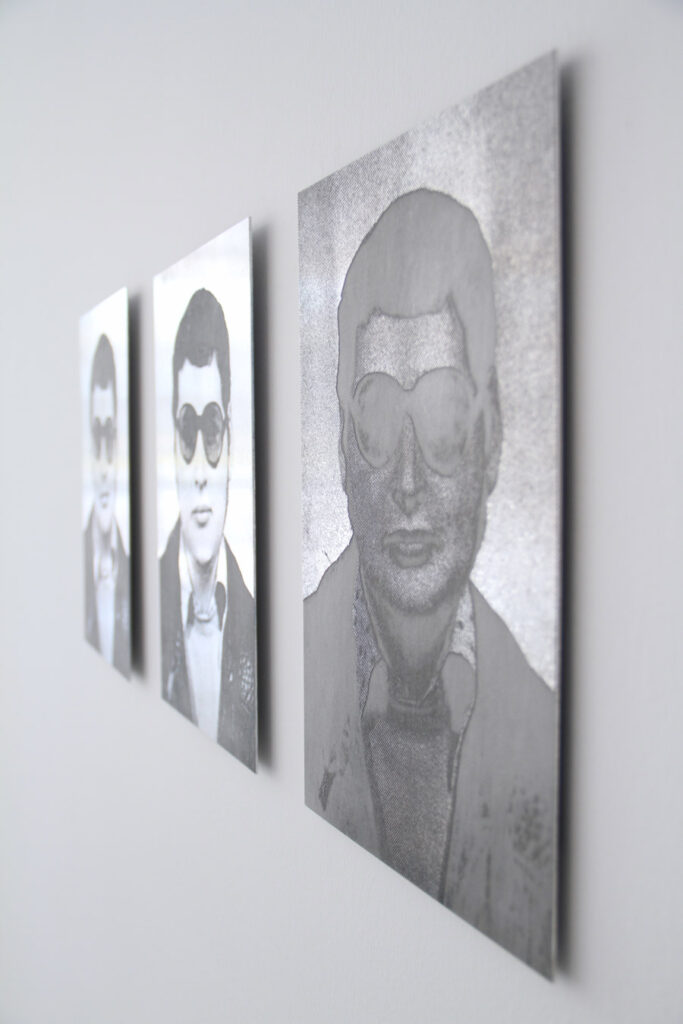