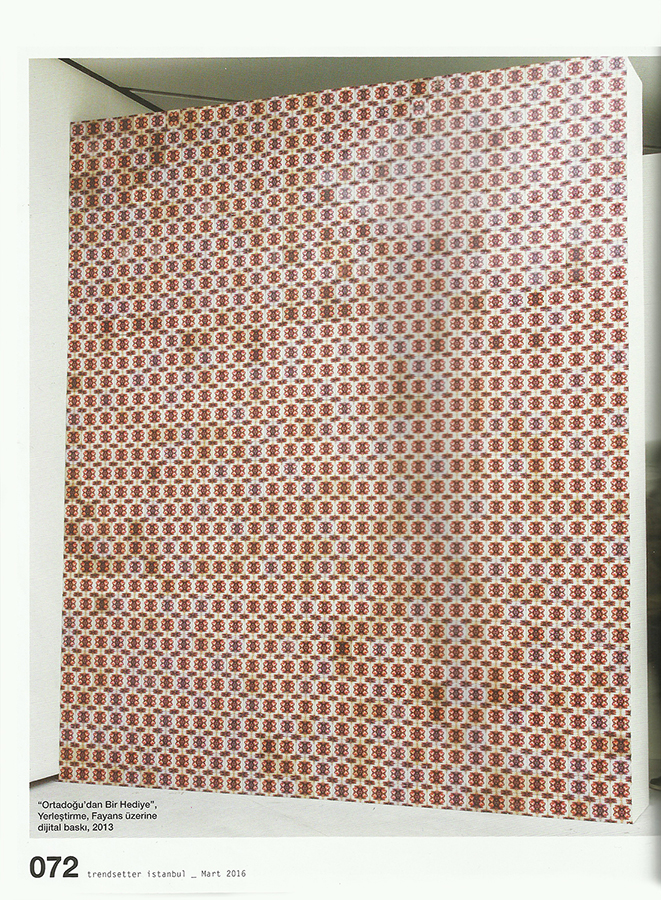 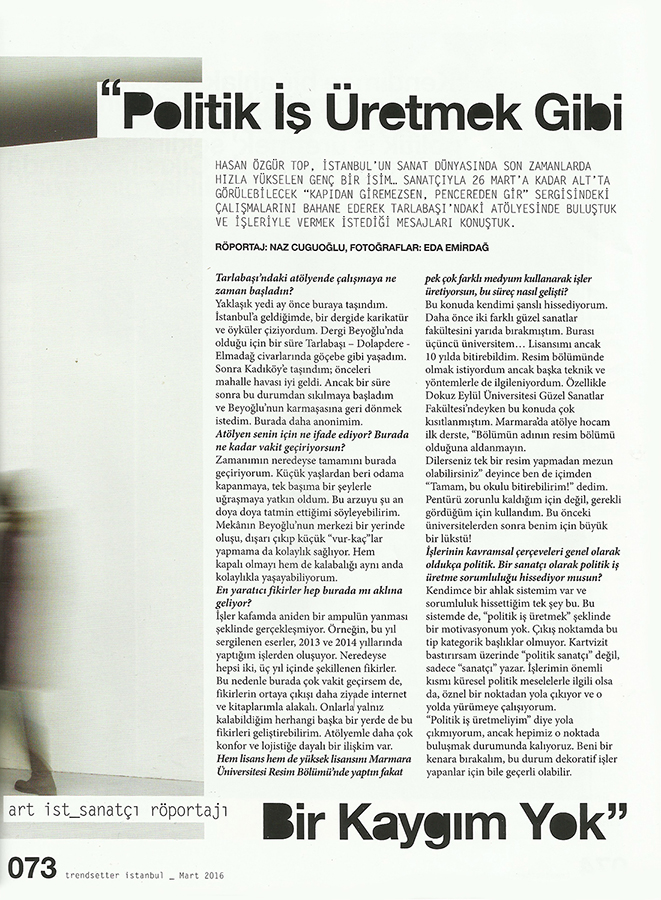 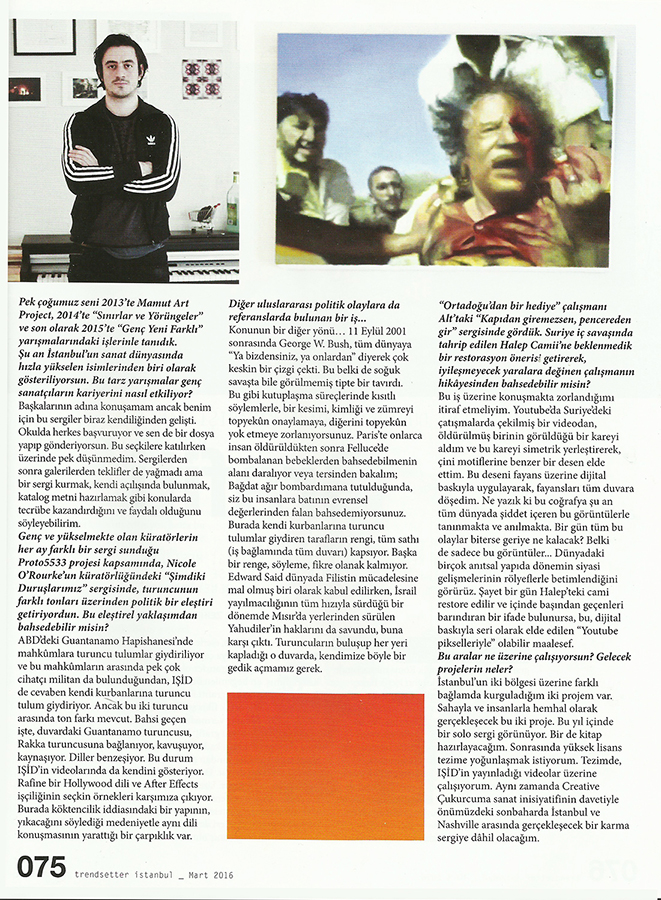 >>INTERVIEW:
“I don’t have any worry about making political art”

When did you first start working in your studio at Tarlabaşı?

I moved here about seven months ago. When I first came to Istanbul in 2007, I was drawing caricatures and graphic stories for a humor magazine. For a while, as the magazine was located in Beyoğlu, I led a nomadic lifestyle in the vicinity of Tarlabaşı-Dolapdere-Elmadağ. Then I moved to Kadıköy where the neighborly atmosphere was refreshing at first. Then I started getting rather tired of it and wanted to return to the chaos of Beyoğlu. I’m more anonymous here.

What does your studio mean to you? How much time do you spend here?

I spend nearly all of my time here. Ever since I was little I’ve been inclined to shut myself up in my room and occupy myself with something. I can say now that I’m able to satisfy that propensity to the maximum. The fact that it’s located in central Beyoğlu means that I can go outside briefly at times and simultaneously experience both isolation and the crowds.

Is it here that you get your most creative ideas?

I don’t usually get ideas like a light bulb going on in my head. For instance, my works being exhibited this year are comprised of works I created in 2013 and 2014. Nearly all of them took shape in the span of two to three years. So even if I spend a lot of time here, the emergence of the works are rather more tied to the Internet and to my books. I can come up with these ideas anywhere I can be alone with those things. My relationship to my studio is based on comfort and logistics more than anything else.

You produce works in a variety of different mediums although you completed both your bachelor’s and your master’s degrees at the Painting Department of Marmara University, how did that come about?

In that regard I feel lucky. I’d previously dropped out of two different fine arts faculties. This was my third university…it was ten years before I could complete my education. I wanted to be in the painting department, but I was also interested in other techniques and methods. The Fine Arts Faculty at Dokuz Eylül University had been especially stifling to me in that sense. At my first class in Marmara Univesity, my studio instructor said, “Don’t be fooled that this is called the painting department. If you wish, you can graduate here without having made a single painting,” and I said to myself, “Excellent, this is a school I can finish!”
I used painting not when I was forced to, but when I felt it was necessary. That was a great luxury after my previous university experiences.

Your works in general have quite political frameworks, do you feel impelled as an artist to create political artworks?

I have my own set of ethics and that’s the only thing I feel impelled to follow. That set of ethics doesn’t contain the obligation to create political artworks. I don’t set out from such categorical titles. If I were to get some business cards they would read, “artist”, not “political artist”. Although the bulk of my work concerns global and political matters, I set off from a subjective point and try to maintain that line. I don’t set off like, “I have to produce a political work,” but we are all ultimately pressed to unite at that point. My work aside, the same might be valid for those who make decorative works.

Most of us came to be acquainted with your work in Mamut Art Project in 2013, “Borders and Orbits” in 2014 and “Young Fresh Different” in 2015. Presently you’re singled out as one of Istanbul’s rising artists. What are the effects of such competitions on the careers of young artists?

I can’t speak on behalf of others, but I got involved in these exhibitions rather as a matter of course. Everyone at school applies, so you make a file and send it in. I didn’t really think it over as I applied to these selections. It’s also not as if I received an overwhelming amount of offers from galleries afterwards but I can say they helped in the sense of experiencing installing your work, attending your own opening and preparing catalog texts.

In the exhibition “The Ways We Stand By”, curated by Nicole O’Rourke as part of the Proto5533 project that has young and rising curators present a different exhibition every month, you made a political statement over different shades of the color orange. Can you tell me about this critical approach?

The inmates at the Guantanamo Prison in the USA are dressed in orange jumpsuits and since many of these inmates are jihadist militants, ISIS dresses its victims in orange jumpsuits as a rejoinder. There’s a difference between the two tones of orange, however. In said work, the orange of Guantanamo on the walls connects to the orange of Ar-Raqqah; unites and fuses with it. The two languages come to mirror one another. The same thing manifests in ISIS’ videos in the form of select examples of refined Hollywood vernacular and After Affects workmanship. There’s something warped about a structure that touts fundamentalism while at the same time speaking the same language as the civilization it claims that it is going to destroy. It’s important to consider that.

Another work that references the events of international politics?

Another aspect of the same issue…after 9/11, George W. Bush sharply divided the world, saying, “You either stand with us or them.” An unprecedented attitude, possibly not even seen in the Cold War. This kind of limited rhetoric in such processes of polarization forces you to approve a certain fraction, identity and class in its entirety while aiming to destroy the other. There’s less tolerance for the mention of the babies being bombarded at Fallujah after the killings of dozens of people in Paris or, conversely, when Baghdad is bombed, you cannot go talking to these people about the ubiquitous values of the West. Here the color of the parties dressing their victims in orange covers the entire surface (in terms of the work, the entire wall). It leaves no space for any other color, rhetoric, or idea. This was the expression of the stifled state I myself was in. Although globally recognized as a staunch supporter of the Palestinian cause, Edward Said also defended the rights of the Jews being driven from their homes in Egypt at a time when Israeli expansion was in full hurtle. On a wall covered by the united shades of orange, it behooves us to create such a niche for ourselves.

We were able to view your work “A Gift from the Middle East” in the show “If you can’t go through the door, go through the window” at Alt. Can you tell me a bit more about this work in which you make an unorthodox proposal to restore the Aleppo Mosque that was damaged in the Syrian Civil War, alluding to the wounds that will never heal?

I have to admit I have a hard time talking about this work. I took a still showing a dead person from a video on Youtube taken at the clashes in Syria and made a symmetrical tile pattern resembling chinaware motifs. After digitally applying the pattern onto ceramic tiles, I covered the wall with it. Right now the region is sadly notorious for such violent imagery. What will be left behind if it all comes to an end one day? Perhaps only these images. All over the world it’s possible to observe political developments decorating monumental structures in the form of reliefs. If the mosque in Aleppo is indeed one day restored to include the events it has endured, it would sadly be fitting to use the digital pattern of the YouTube pixels.

What are you working on nowadays? What projects do you plan for the future?

I have two projects that I’m constructing around two different areas of Istanbul. The two projects will be realized in collaboration with the field and the people. I’m looking forward to a solo exhibition within the year and I’m also going to make a book. After that, I want to focus on my master’s thesis that concerns ISIS’ videos. By invitation of the art initiative Creative Çukurcuma, I’ll also be part of a group show to take place in Istanbul and Nashville next fall.