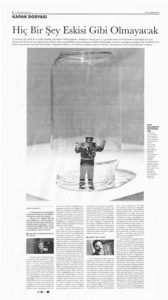 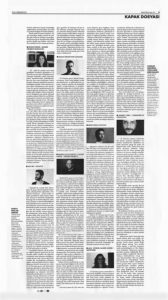 Nothing Will Be The Same

Where were you on the night of July 15 and how did you perceive the events from start to finish? It was a collective experience, but how was it for you?

I was in Taksim Square on the night of July 15. It was there I attempted to experience and observe what was happening. To be honest, I had been noticing coup-themed news and texts in the foreign press and foreign thought institutions for months, and I sensed that something might happen, but I wasn’t prepared for such a concentrated packet of violence. In the first hours of the coup attempt, Taksim Square seemed calm and I had limited access to information. That’s why in the beginning, I couldn’t grasp the magnitude of the violence at first, but the following hours revealed the extent of the situation and then it was frightening. Besides the whole realpolitik flow of information, when the F-16’s began dive-bombing right above us, I felt in my deepest depths how incapable humanity is rendered by its own industry. The visuals from Ankara of the helicopters opening fire on people resembled some kind of alien invasion. For the first time I conceived of the destructive power of conventional armies in this way in Istanbul and Ankara, or we all did.

It might be too early to comment, but what changed in your life plans, in the sense of productivity, creativity and sharing your creativity, after that day? Where did you stand, where are you now?

It really is too early to comment, but something I’m already able to observe is that I’m making an effort to be much more mobilized in my artistic production. That effort isn’t entirely new, since I’ve been preparing myself for the worst for a long time. Now, sadly, I see that step by step, the worst really is happening, and my sentiments are giving way to concrete efforts. I see myself embracing a lifestyle and mode of production that is mobile, portable and hit-and-run.