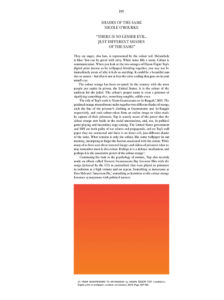 Shades Of The Same

“THERE IS NO LESSER EVIL,
JUST DIFFERENT SHADES
OF THE SAME”

They say anger, also lust, is represented by the colour red. Melancholy is blue. You can be green with envy. White noise fills a room. Colour is communication. When you look at the two oranges of Hasan Özgür Top’s
digital print (meant to be wallpaper) blending together, you may not be immediately aware of why it feels so startling. It could be a beautiful sunrise or sunset – but that is not in fact the color-coding that goes on in your mind’s eye.
The colour orange has been co-opted. In the country with the most people per capita in prison, the United States, it is the colour of the uniform for the jailed. The colour’s proper name is even a prisoner of signifying something else, something tangible, edible even.
The title of Top’s work is ‘From Guantanamo to Ar-Raqqah,’ 2015. The gradated orange monochrome melts together two different shades of orange, each the hue of the prisoner’s clothing at Guantanamo and Ar-Raqqah respectively, and each colour taken from an online image or video made by captors of their prisoners. Top is acutely aware of the power that the colour orange now holds in the social unconscious, and, too, in political game-playing and incendiary copy-catting. The United States government and ISIS are both guilty of war crimes and propaganda, and on Top’s wallpaper they are connected and there is no lesser evil, just different shades of the same. What remains is only the colour, like some wallpaper in our memory, attempting to forget the horrors associated with the colour. While many of us have seen these tortured images and videos of prisoners what we may remember most is this colour. Perhaps it is a defence mechanism, and perhaps it is the associative power of the colour orange 1.
Continuing his look at the psychology of torture, Top also recently made an album called Torture: Guantanamo Bay Greatest Hits with the songs (released by the CIA to journalists) that were played to prisoners in isolation at a high volume and on repeat. Something as innocuous as Don Mclean’s ‘American Pie,’ something as harmless as the colour orange becomes synonymous with political torture